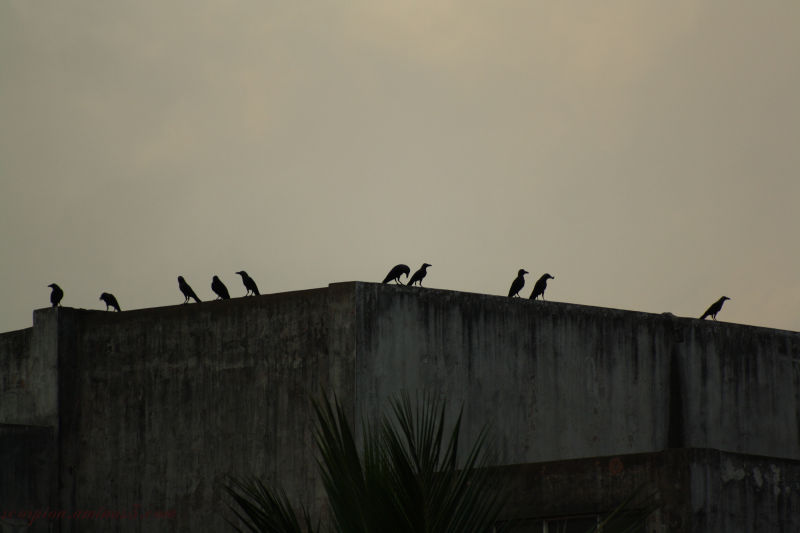 You have all just witnessed a "Murder"....

Posted by Sunder (Chennai, India) on 7 September 2010 in Animal & Insect and Portfolio.

Did you all know?
Apparently, the collective noun for a group of crows is " a murder of crows"...

I am sure a group of crows would have "crowed"( is that the term?) their throats hoarse and driven some poor soul up the wall - to the point of suicide...This must have led him to coin the phrase a "murder of crows"

I am no ornithologist, but it is my astute (?) observation that these fellas are usually loners by the day flying here and there.... and as night approaches, by twilight, they all assemble to form "murders"...

The other remarkable feature was during Tsunami Disaster in Dec 2004 in Chennai, literally hundreds to thousands of these fellas were flying "amuck" in huge "murders" with their squacking almost deafening...
"Sixth or should I say Seventh sense, perhaps..?"

great image. and yes animals / birds ..
perhaps have a lot more sense and knowing than most humans give them credit for!

This superb shot with the silhouettes of ravens always worrying. This picture reminds me of Hitchcock film "The Birds". Good day.

Hitchcock's birds waiting for us: :)

...and they are standing guard now...

I love the lighting and the composition. . .great!

Black image which lets augur of the worst Brrr!!!

It looks like a funeral line up. Nice shot.

A great composition for this "murder of crow" . The dark tones of this image add to an impressiv photo !

The MaJor from TM HooD, Iran

wow..this informations are a lil scary but good to now..

Crows. They are signs of death. Very very creepy.

I think you show the scene very well. The silhouette reflects the "crows" associating to "death".

Aren't English collectives nouns stupid! That said, a buddy of mine lives in the country, and he would happily muder the crows that wake him up every morning with their loud, tuneless squaking! Lovely shot-well seen and taken!

a nice composition ,with this birds silhouettes !!
friendships !

A fine shot to accompany the explanation of "murders." That one is new to me. Fine shot.

A fine shot of this murder on the massive wall.

Good evening Sunders,
It is an interesting subject. Crows and ravens are very intelligent birds. Have a nice evening and all the best.
Sincerely Christel

Hitckockist thème ! Could you switch on the light please ?!!!
Great colors and light in this one !

Great title. yes I knew it was a murder. I also love to photograph crows, blackbirds etc.

You sure catched a sinistre mood here..murder or not!:)

I like how they are all looking in somewhat different directions, just like a person who has seen something but he does not want others to know, i.e. witness to a murder. Great job Sunder :-)

What a positively nightmarish gathering, just waiting for a victim. A chilling shot.

WOW! Now I didn't know that! A 'murder of crows'... how very interesting! Animals have most deffinitely an extra sense when it comes to nature. You are aware of the earthquake that hit New Zealand over the weekend. There have been more than 120 after shocks since it happened they fear a bigger one is still to come... back to your point... what I find very interesting is that a few weeks before the earthquake a pod of 60 whales beached themselves... they basically swam out onto the sand... only 9 were saved...

love the composition! Very cool and interesting shot! I knew they called this a murder of crows! So weird! But anyway love this!

We also have a lot of crows right now - more than I can ever remember. This is a great shot! i love the waiting feeling of it. Interesting text.

Quite a fascinating story you share here.... and i love the lighting of your image, very mysterious to illustrate the topic the best way, love the compo t_°°

Love this one, super!

Not my favourite birds, but I great shot with a lot of suspense in it.....also thanks to Mr. Hitchcock! (yeah-me too;-)

... may be, but all are pretending, looking towards elsewhere. Original pic.

Have you seen "Birds", the movie by Hitchcock ?

Interesting composition... The birds seem to follow the green, as its fruit !