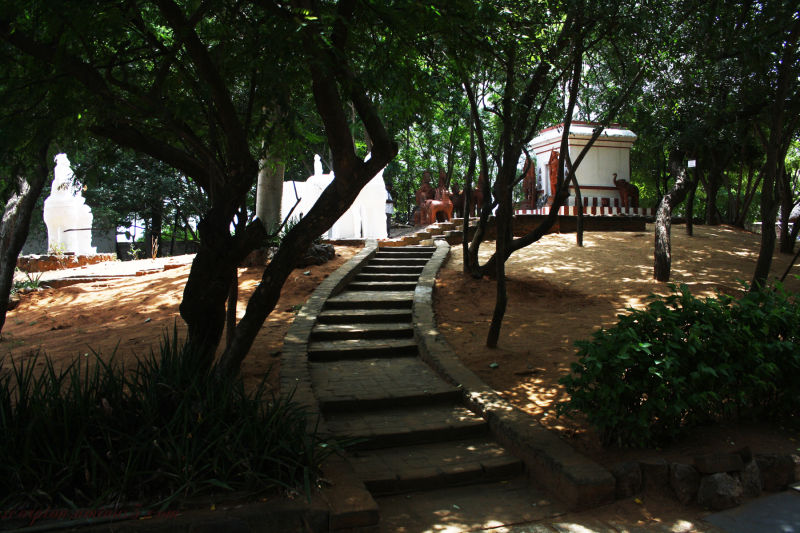 Posted by Sunder (Chennai, India) on 15 October 2010 in Lifestyle & Culture and Portfolio.

"Ayyanar" (pronounced "eye - yeah- naar ") temples are specific to Tamils and are found in State of Tamil Nadu, (South India) of which Chennai is the capital city.

Ayyanar is a "gaurdian" diety and his temples are located always at the outskirts of the villages. Rural villagers firmly believe that he gaurds their villages, properties. While the offerings are vegetarian in many temples, sacrifices of animals such as lamb and chicken are common.

Even today, Hindu temple priests are usually Brahmins ( highest in the caste system, which is still very much prevelant ) and only they are allowed into the Sanctum saanctorium of temples.

I really love the light in this shot

it's a very nice temple

Beautiful work on the light

Nice light and depth to this photo, well sone.

A beautiful pathway. It forms an inviting curve to the temple. Great lighting effect you achieve here!

marci from somewhere in..., Morocco

a very peaceful place! I love the sense of peaking in that you've given us~

Beautiful composition with the shadows .

From shade into sun. I like the way you lead us along this path through the trees. Beautiful !!

What a wonderful perspective to the temple with this beautiful light play!

Beautiful way to the temple Sunder! These roads full of mixed vegetation lights and shadows. Ideal for meditation and tuning the spirit! Very good light and well composed the scene. Delicate and charming! Best regards, Adela

Nice composition with this path leading to the temple !

Wonderful framing.. like how the stairs leading my eyes to the centre..

Like the dark leading to the light on this beautiful path.
A great picture showing this worship site.

Wow... this is very beautiful Sunder ! This lovely path adds a lot of dynamic to the whole composition, well done ! Have a great day :)

the s-shaped path to the temple leads you right into the picture...it’s hard to go “wrong” with there is an “s” to follow....good job...good explanation too

Very nice shot taken at this angle, I like the way it leads the eye up the path and lovely light.

Nice composition and good play between light and shadow.

A beautiful path that leads into the sunlight! Beautiful composition!

So well composed and beautiful light and shadow play, and a informative post, even though I lived in the area for 3 years your posts are showing me how little I really learned or remember of the culture there

@JJ: When and whereabouts in Chennai did you live in? Or was it called Madras then?

So this is an "Overlay" religion-basic Hindu, plus this for your region. How funky! What a good idea! Oh, and , BTW, I love the shot! Sorry I haven'y put the tuts up yet, every time I start, the phone rings! I will get them done soon I promise!

Great depth in this beautiful picture

Very nicely done SUnder, and I really appreciate the very informative narration. Thank you so much sir!

A fine composition of this stairway shot. Very interesting about the temple and those approved to minister there.

Love this view. There's much anticipation in the appraoach. Can't wait!

A lovely shot of the temple grounds with the sun coming through the trees. Thanks for the information, too.

What wonderful light that shines its way on this path. Lovely image!

Superb photo with a very good framing. The light is very nice. Have a lovely day.

Good evening Sunder
It is a very pretty sight. Colors and details including sunlight and shadows are excellent. The general view conveys harmony. Have a nice weekend and all the best. Sincerely Christel

I love this meandering capture with the trees and their canopies that make great silhouettes against the background.

I want to see more !

Interesting info. Can anyone go to the temple or do you have to be of certain class? Nice light in you pic ^^

From shadow to light, nice shot

What a beautiful, and interesting place. Wonderful lighting

Tim from Ft. Worth, United States