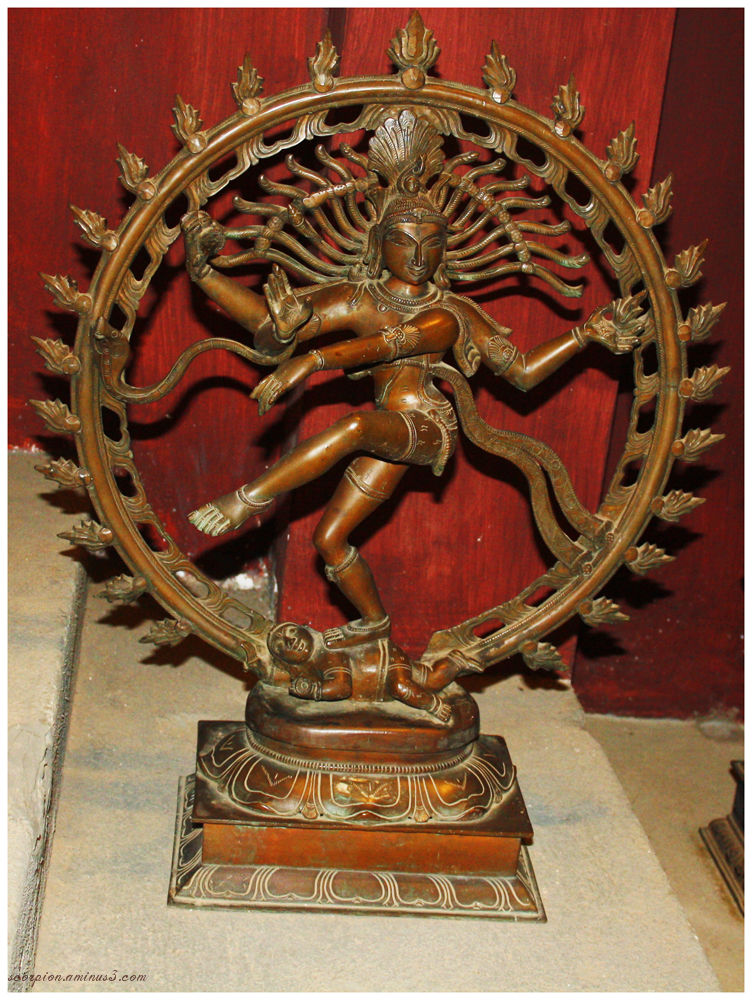 Posted by Sunder (Chennai, India) on 15 February 2011 in Art & Design and Portfolio.

Shiva as Nataraja – Symbolism and Meaning hidden in the Natraja Murti

In Hinduism, Lord Shiva as Nataraja (Lord of the Dance) performs the Tandava – the dance in which the universe is created, maintained, and resolved.

Here are the symbolism and meaning hidden in the Nataraja Idol

Upper Right Hand: In his upper right hand Shiva holds the damaru – a small drum shaped like an hourglass. It symbolizes the sound that originates creation and perpetuates the universe.

Upper Left Hand: The upper left hand contains Agni or fire, which signifies final destruction, the dissolution of form, out of which a new world will arise.

Below Right Hand: The second right hand shows the Abhaya mudra (meaning fearlessness in Sanskrit), giving freedom from fear and bestowing protection from both evil and ignorance.

The Below Left Hand: The second left hand points towards the raised foot which signifies upliftment and salvation. It also follows the form of an elephant trunk, alluding to wisdom.

The Dwarf on which Shiva Dances: The dwarf on which Nataraja dances is the demon Apasmara, symbolizing Shiva's victory over ignorance, which can never be completely eliminated, but it can be overcome.

Snake Around Waist: The snake swirling around his waist is kundalini, the Shakti or divine force thought to reside within everything. His dance is so vigorous that his hair, usually in matted locks piled on his head, becomes loose and flies about him.

Ganga on Hair: Seated within his hair is the diminutive figure of Mother Ganga, the river goddess, with her hands folded. When the river descended from heaven to earth, Shiva broke its fall with his hair, thereby keeping the earth from being crushed by its force.

Face of Shiva: As he dances the world in and out of existence, Shiva maintains a stoic face, representing his neutrality of being in complete balance.

perb picture and thank you for all the explanations very interesting. Good day.

marci from in, Morocco

all of this is so interesting! great shot and fabulous documentarian!

Have you read a book called 'Cutting for Stone' ? One of the characters is called Shiva.

Interesting Sunder, I never knew the meaning and the representation..

very interesting both the pic and the text...

Such a rich culture, such a great shot

Superb capture of this intriguing Idol and piece of art! Interesting details you provide as well.

A wonderfully complex symbol which you have explained beautifully! I always enjoy learning about other cultures and their beliefs. Thank you very much for sharing Sunder! ;-)

Love to see all those different details in this statue and your explanation is perfect, I had a great time reading and watching!

A beautiful and intriguing piece of art! Great shot and interesting info that goes with it!

A fine shot of this special emblem. Solid color and detail too. Very nice shot.

I have to agree the details to this shot really are nice!

Lovely capture and thank you for the interesting words!

a very precious image of a wonderfully crafted statue, and an intriguing and thrilling introduction to the symbolism behind it!

A lovely statue and thanks for the very interesting information.

fine capture. thanks for the commentary

A beautiful photo. Thanks so much for the explanatory text.

Beautiful statue and many thanks for the info.

What a beautiful idol ! Great shot

how beautiful and fantastic description - I have always wondered about this. Marvelous - Thank you!!

Nice close-up with great detail of this ornate statue. Love the write-up as well.