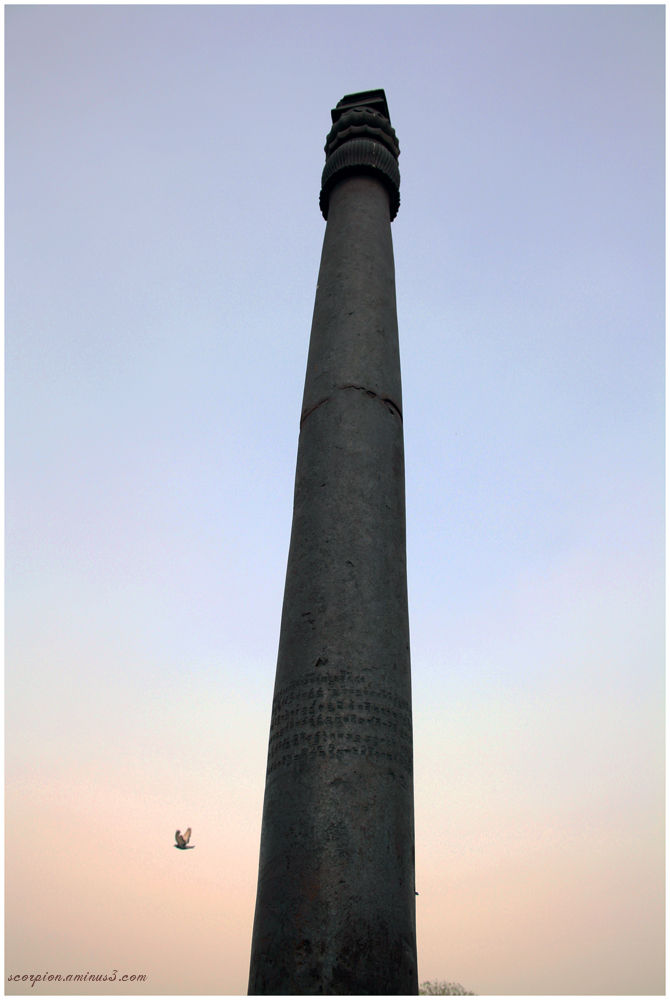 Posted by Sunder (Chennai, India) on 18 April 2011 in Architecture and Portfolio.

The iron pillar is one of the world’s foremost metallurgical curiosities. The pillar, 7.21 metre high and weighing more than six tonnes, was originally erected by Chandragupta II Vikramaditya (375–414 AD) in front of a Vishnu Temple complex at Udayagiri around 402 AD, and later shifted by Aanagpal in 10th Century AD from Udaygiri to its present location. Anangpal built a Vishnu Temple here and wanted this pillar to be a part of that temple.

The estimated weight of the decorative bell of the pillar is 646 kg while the main body weighs 5865 kg thereby making the entire pillar weigh at 6,511 kg. The pillar bears an inscription in Sanskrit in Brahmi script dating 4th century AD, which indicates that the pillar was set up as a Vishnudhvaja, standard of god Vishnu, on the hill known as Vishnupada in memory of a mighty king named Chandra, believed to Chandragupta II. A deep socket on the top of this ornate capital suggests that probably an image of Garuda was fixed into it, as common in such flagpoles

An incredible Pillar! This is a great document, I'd like to see it from other points of view! :)

Nice capture, and I love that bird!

I remember reading about this pillar. It has an odd metalurgical composition which means it doesn't rust as much as it should do, hence the fact that it's still here. A really marvel

very cool - heavy!! Wonderful shot of this - glad the birdie showed up for the shoot!

The bird gives the picture something extra

Excellent documentation Sunder. Shame that Garuda has flown the roost:)

An impressive piece of history, indeed. Your text is a wonderful enhancement to a fine photograph, as is the passage of a bird.

Awesome perspective and a good explanation. Thanks for all.

very interesting . love this lower light and toning .. and a little bird is just great !

Super angle - great shot with the bird in frame!

An amazing pillar. I like your explanation of its origin and life-span.

The soft graduation of color, the near silhouette yet ability to see the tower is inscribed and the bird really pull this image together nicely!

Beautifully composed - love the little bird in the frame - :)

I have read about this many times, and there are also many theories about it. When you think about it - to make 6000kg of molten metal you would have needed a pretty big furnace and machinery - was this possible in 4AD ?

Wonderful perspective and POV. I like the color tones of the sky

Great capture of the pillar and the bird in flight, along with the informative narrative. I just love the history behind this. I don't think anything in the US could remain standing as long as this has. :-)

A cool shot of this iron pillar especially with the bird on the wing.